Home / Best Cities for Young College Grads to Move to

Every year, a huge population of students finishes their college and gets ready to start an adult life. They go out in search of cheaper housing, job opportunities, and places to make their new life possible. If you are one of them, then Verified Movers have something for you! Today, we have created a list of the best cities for your college grads to move to. Taking many factors into consideration, we believe we were able to find a place for everyone. So strap up and dive into our article to find your new place for life!

As you might imagine, there is a lot that can make a city good. And of course, just like there are many, many different people – so there are many, many different cities for them. What works for some just doesn’t for others. For example, you might be a fan of huge cities bursting with people. Then, you might look for something with a great nightlife and opportunities. Conversely, you might be ready to settle down somewhere more quiet – and you will look for a smaller suburban place.

Still, as a college grad, there are a couple of trends that might affect you. And so, by following these, we tried to figure out what the best cities for young college grads were based on the young-adult population. This way, there is a huge chance that one of these cities will fit you right – since it does so many other people! But of course, this is not the only thing we looked at.

The main factors in deciding the best cities for young college grads:

As you can see, many of these share the traits with those where educated Millennials are moving to! They give you affordable living space, with a booming economic market that offers many job opportunities. Whether you want to start working in a company or start your own business, you are sure to find your place in one of these cities. So, without further ado, meet the best cities for young college grads! 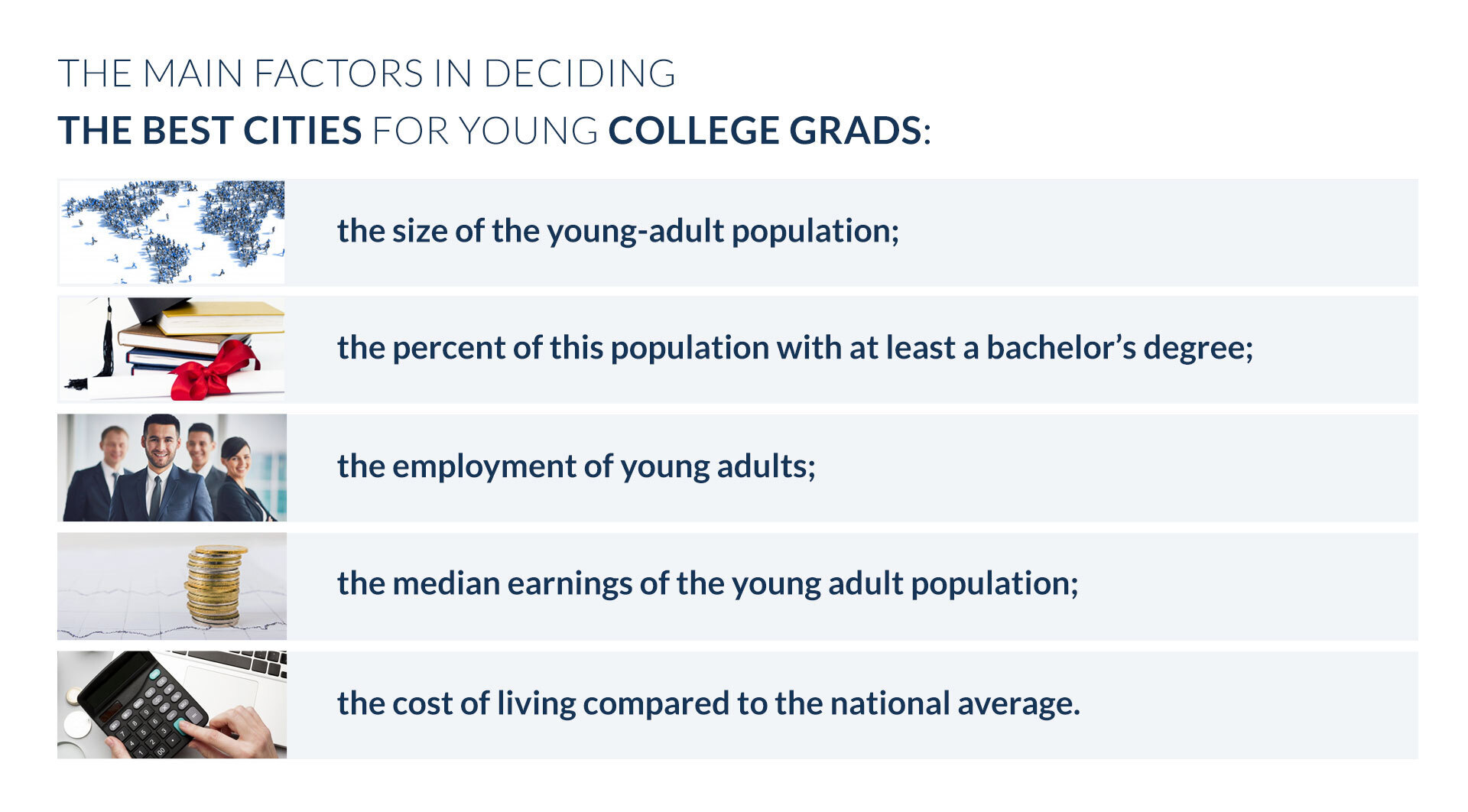 Gainesville, Florida is the home of the University of Florida

Gainesville is the largest city in Alachua Couty, whose county seat is also. It is also the principal city of the Gainesville metropolitan statistical area as well as the largest city in the north-central part of the state of Florida. In 2018, the population of Gainseville was around 134,000 people, which increased by over 7% from 2010. Meanwhile, the population of the MSA is significantly bigger, around 288,000 people.

However, the reason why Gainesville is one of the cities with the biggest young-adult population share (staggering 29.8%) is because of the University of Florida which you can find here. Many students of the University, after moving here with Florida movers, fall in love with Gainesville. This can be because there is just so much to do in the city, or because the relative cost of living is 5.8% less expensive than in the rest of the country.

Whatever the reason, people stay here after getting their bachelor’s degree. 28.3% of the young adults in Gainesville have at least this level of education! Adding the fact that the unemployment rate is 5.1% and the median earning is $20,000, and you have one of the best cities for young college grads!

Lincoln is the capital of Nebraska with a low unemployment rate

If Florida is not your cup of tea, then head to Nebraska! The state’s capital city, Lincoln, is the county seat of Lancaster County. Sprawling over 96.194 square miles, it has a population of around 287,500, which makes it the second-largest in Nebraska state. However, to our country’s standards, it ranks only in the 70th place.

Still, the city is the center of economy and culture in the larger metro area called the Lincoln Metropolitan and Lincoln-Beatrice Combined Statistical Areas. The area is home to over 356,000 people but is still considered small when compared to other places around the country. What makes Lincoln significant, though, is again – the young-adult population. And just like in Gainesville, it is due to the University of Nebraska that you can find here! So make sure you call Nebraska movers to arrange your move after reading these fine fats about this fine city!

What else makes Lincoln one of the best cities for young college grads to move to: 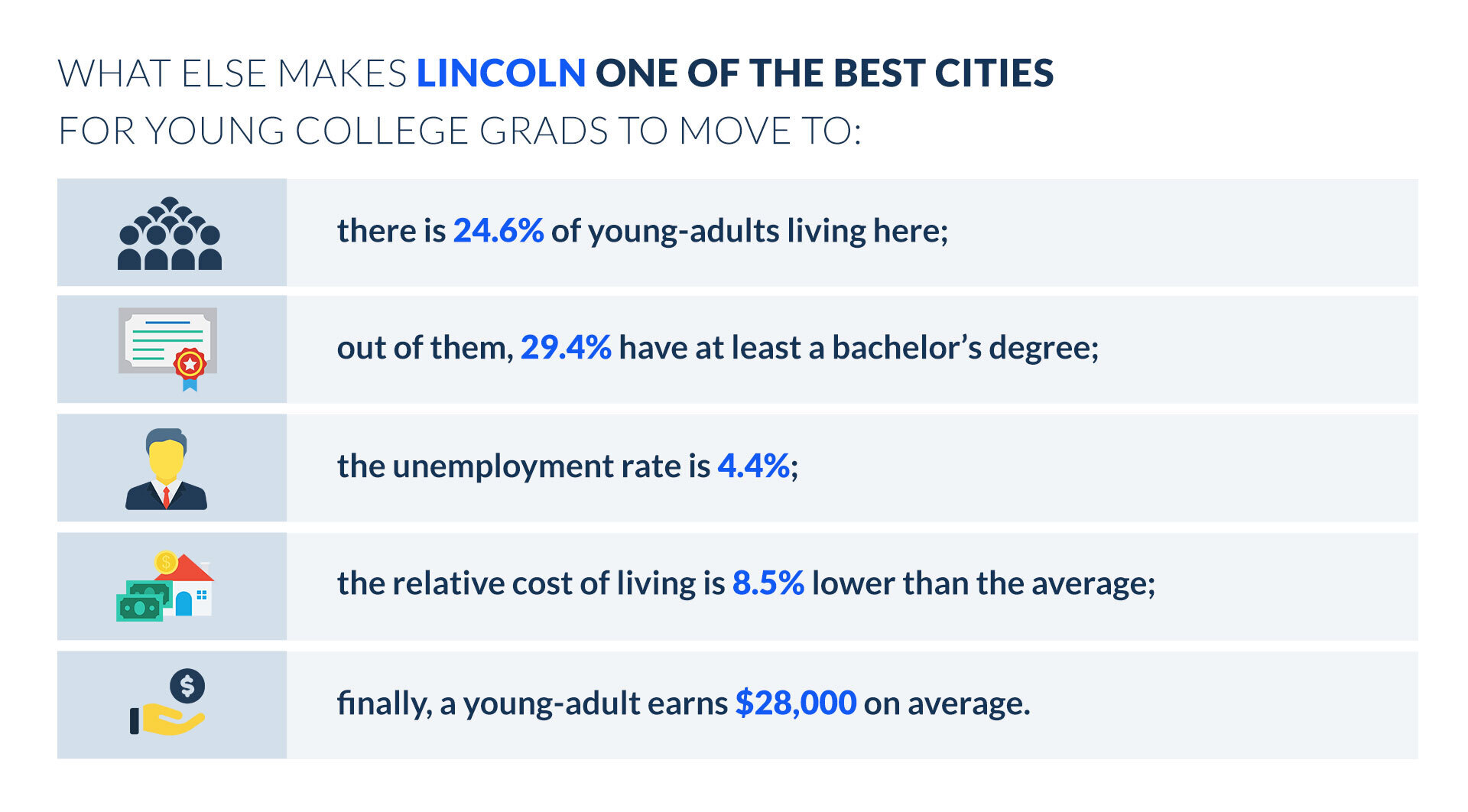 Move to Silicon Valley and San Jose, California if you want to earn some money!

San Jose, California, or officially the City os San José, is the largest city in Northern California – both by the number of people living here (over one million) and the area. As a matter of fact, it is the third-most populous city in the state of California, right after Los Angeles and San Diego. San Jose also takes the 10th place when it comes to the population in the whole country. It is also the centre of Silicon Valley when it comes to economy, culture and politics, and so it is no wonder why it is one of the best cities for young college grads to move to.

However, the main concern you might have about calling your movers is that this is definitely not one of the most affordable cities to move to. San Jose is the county seat of Santa Clara County. This is the most affluent county in the state, as well as one of the most affluent counties in the whole country. The cost of living is a staggering 30.9% higher than the national average. The reason for this is the high earnings of the residents. A young-adult will, on average, earn $43,700, and the unemployment rate is 4.8%. What’s more, the city has one of the highest percentage of young adults with at least a bachelor’s degree – 46.6%! This is why 22.2% of the population of the city is young adults.

If you still want to live in California, then San Francisco is one of the best cities for young college grads to move to!

If you have probably not heard about the previous two entries, you must have heard about San Francisco! One of the biggest and most famous metro areas in Silicon Valley is a tech industry giant. Officially the City and County of San Francisco, you will find this financial, commercial and cultural beast in northern California. The residents often call it by other names though. These include SF, San Fran, Frisco or just “The City”. It is a bit smaller than San Jose and with around 883,000 people, it is the 15th most populous in the country.

The city is quite popular with young adults, though, which might prompt you to call your California movers. It is the most densely populated city in the country after New York City. 22% of this is young adults, who earn around $40,000 on average. This is to cover the cost of living which is high, yet not as high as San Jose. Here, you will pay 28% more than the average person in our country. 44.7% of people with at least a bachelor’s degree can afford this, though, since their unemployment rate is 5.2%.

Boston is a university town as well as one of the best cities for young college drags to move to!

One of the main traits of all the cities we have discussed in this article is that they are tied with colleges or universities. Boston, Massachusetts is a great example of this. Just the number of institutions of higher learning makes Boston the world leader in this field. The many colleges include law, medicine, engineering and business schools, so the staggering number of around 5,000 startups is not surprising. Instead, it makes Boston a perfect place for innovators and entrepreneurs!

And as far as the geopolitics go, Boston is the capital – as well as the most populous city – of the Commonwealth of Massachusetts. However, it is not too big – it takes only 21st place in the whole country, with a population of around 695,000 people. However, it is the most populous in the New England area, and the seat of Suffolk County too. So, why should you call Massachusetts movers and start planning your Boston relocation? Well, the reasons are many!

Why should you consider moving to Boston as a young college grad? 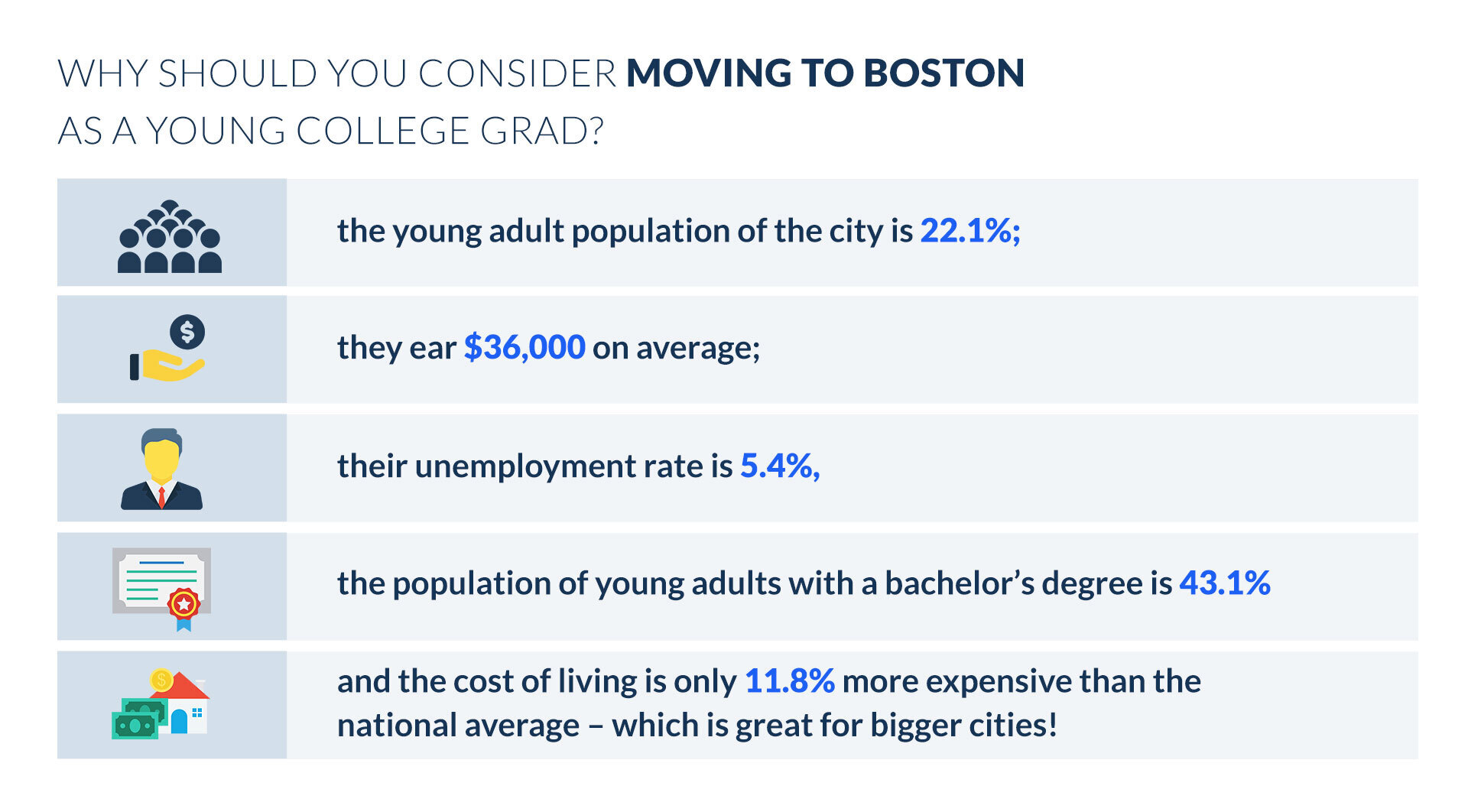 Denver, Colorado is fighting against the skyrocketing housing costs on the West Coast!

If you are tired of the high housing costs you will find in California, then head east to Colorado! Here, you will find Denver, the capital, and the most populous city, of its state. In the South Platte River Valley, right on the edge of the High Plains and the Rocky Mountains, Denver is home to around 716,500 people, which makes it the 19th most populous in the country. The city isn’t losing steam, though. This number marks an increase of almost 20% when compared to the 2010 United States Census, and makes it one of the fastest-growing in the whole country.

The reason for this is that it is one of the best cities for young college grads in the country. Colorado movers will take you to a place where the cost of living is low (just 6.3% higher than the average – but for a state capital, this is great!) while the median earnings for young adults are $35,000. There is 37.1% of young adults with a degree, and the total young adult population makes 22.4% of Denver. Their unemployment rate is only 4%, which means you will find a job – and be well paid – with ease!

There are a lot of things that we can note as a conclusion to this list. First, we want to address the fact that a lot of the best cities for young college grads to move to are the ones students are moving to as well. The reasons for this are simple. University cities usually tend to offer lower rents for their students and thus lower costs of living. Secondly, many forerunners in the industry world are looking for young hires, and they set up their headquarters in these cities. This makes it easy to find and employ young college grads straight from the school! So, many people opt to stay in the cities where they studied, and thus create perfect communities for them.

The second thing we want to make clear is that our list of the best cities for young college grads is finite, but the real world isn’t. There are so many amazing places all around the city that you can explore! We wanted to offer you a taste of cities from different parts of the country, but you should look into those we didn’t get to talk about as well! This way, you are sure to find what you are looking for, just with a little effort and attention! Then, all you will need to do is simply contact us for a safe and easy relocation there! Good luck!