Home / Why Do Americans Move So Much More Than Europeans?

According to different studies, Americans are very mobile and tend to move a lot. In fact, numbers show that an average resident of the United States will relocate 11 times in their life! Even though the number of relocations per each year has declined a little bit, we still have a lot of people in the USA who are moving. But why is this happening? What are the reasons people change their addresses that often? And, why do Americans move so much more than Europeans?

This is a fascinating and quite complex phenomenon and we wanted to learn a bit more about it. So, to get answers to these questions we, at Verified Movers, have compared the lifestyle in America with the one in Europe. We also listed the main reasons why people are moving just to see whether there are any differences between Americans and Europeans. Our research helped us connect dots and we finally learned why relocations happen so much more in America than in Europe. Keep reading to learn more about our findings!

Have you ever asked yourself how many times does the average person move? We see moving trucks and cardboard boxes in front of houses all the time. Even without precise numbers, we can come to the conclusion that it is perfectly normal to frequently change your address. But, why is this happening? Why do so many people choose to leave their homes or offices and move to another place?

Well, there are many reasons why people are deciding to relocate their belongings. Trust us, we have been a part of this industry for so many years and we have seen it all! Working close to some of the best moving companies has helped us notice what the most common reasons are for moving to another place. Let’s take a look at them!

Who are the people who move?

It is no secret that relocations can be pricey. If you aren’t being careful, you could end up with a moving company that is expensive and offers services of average quality. But, this doesn’t mean that Americans move more than Europeans just because they have more money and can afford moving services! Most people think that only rich people can afford to move their belongings more than once. That is not true! What is important is to choose the company you want to hire carefully and plan your moving budget. Affordable and quality moving companies do exist – you just have to find them.

So, if rich people aren’t the only ones who tend to relocate a lot, then who else is relocating?

Who moves the most?

If you have been wondering how many times does the average family move, now you can see that families and people who live alone are the ones who relocate the most. No wonder this is happening because families are always looking for homes and surroundings that are the safest options for their children. If parents see that they can’t afford their home anymore or they believe they can find a safer neighborhood, they should look for other options where they can relocate and live a happy life.

How often do Americans move?

As you can see, there are many reasons why people decide to move their belongings and almost all of them include the need for finding better, safer, and healthier surroundings. So, we now know that people in the USA tend to move a lot. But, are Americans moving more than Europeans? Well, let’s take a look at some numbers and we will get the answer to this question.

Studies show us that around 31 million Americans move each year. Whether it’s just down the street or to another state, these types of relocations still count. Americans are moving throughout the entire year but some months are more popular than others. Here is what we are talking about.

Number of relocations per month in the USA:

It is expected that the average person who lives in the USA will move around 11 times in their life. After they turn 18, they will move every 4-5 years. And, as we can see from the numbers above, summer months are the most popular time for relocation. This is the busiest season for moving companies which is why some of them offer pricier services during these months. Keep that in mind when you choose your moving date.

And, what about Europeans, how often do they move?

So, why do Americans move so much more than Europeans?

As you can see, it is true that Americans are more mobile than Europeans. This is something that has been going on for a couple of decades, so it isn’t a new phenomenon. But, why are Americans moving so much more than Europeans? Why are so many of them moving to another state, city, or neighborhood?

What is important to understand that Europe and America are very different. Even if you have never been to some European country, you are probably already aware of this fact. Americans have a different lifestyle which is exactly why they move more frequently. Here are only some of the reasons why Europeans aren’t as mobile as Americans are.

There is a big difference between moving within the USA and moving within Europe. Let’s say you want to move from Florida to Texas. You will organize the move, hire a reliable company, and wait for the big move. Well, if you want to move within Europan countries, you will have to learn the language first. In America, things are pretty simple – everyone knows English and everyone is using it. That is not the case with Europe. Don’t get us wrong, you can relocate only with English knowledge and hope the residents of the country where you plan to relocate will know it too. Also, you can learn the language after you move, but this is something you should avoid. Of course, there are some countries in Europe with English as their first language, but there aren’t a lot of them.

Let’s take a look at the most commonly used languages in Europe to help you understand why a language barrier is one of the reasons why Americans move so much more than Europeans.

The most commonly used languages in Europe 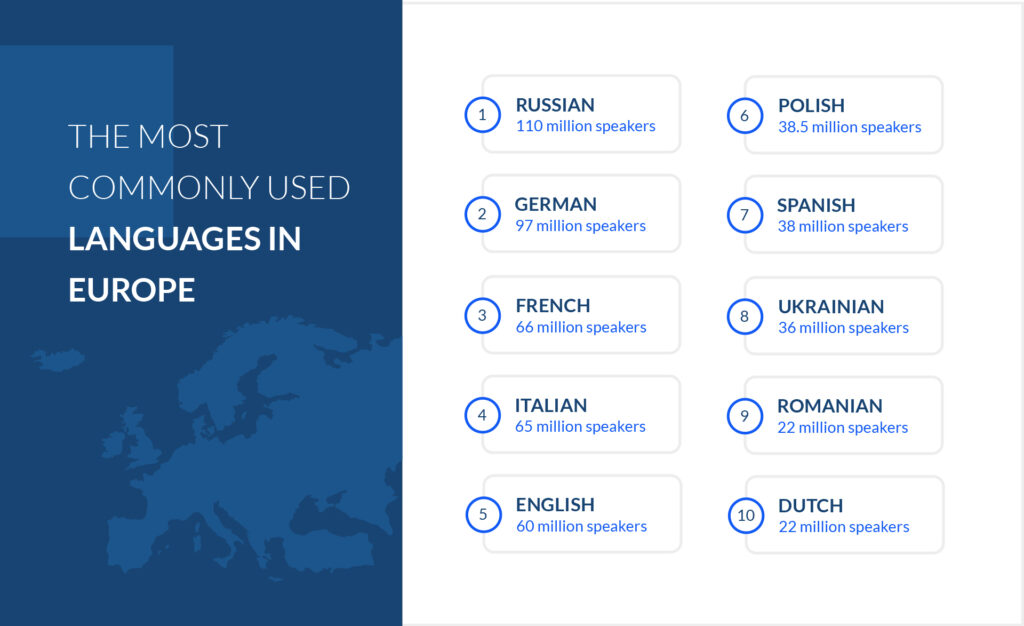 We have already talked about how getting a new job or getting a job transfer is one of the reasons why people decide to relocate. According to the World Bank, labor mobility is higher in the USA than in any other country. That is why Americans move so often! Since there is no language barrier, it is simpler for them to move within the USA and get a job in any state they choose. They get job transfers quite often since it isn’t that complicated to move to another country. On the other hand, Europeans don’t change jobs as often as Americans. In addition to this, their jobs are more stable and they are happier with their work environment and conditions.

Apart from a language barrier, Europeans also have to deal with cultural differences when they move to a different country. Keep in mind this isn’t the same thing as moving to another state. When you compare East Coast vs West Coast, you will see there are many differences between them. But, these differences aren’t that challenging.

On the other hand, if you move from Italy to Finland, you will need to prepare for a cultural shock! Moving to a totally unfamiliar place, where people have a different language and different culture can be very overwhelming. But don’t worry. If you do your homework and get informed about your new surroundings before the big move, you won’t have to worry about how you will settle in.

The upsides and downsides of moving frequently

Every relocation comes with a set of upsides and downsides. Most people find this to be an overwhelming and quite emotional process. But, it doesn’t have to be that way. If you deal with moving preparations and organize the entire move, it will be a lot easier for you to relocate from point A to point B. But, what about frequent relocations? What are the pros and cons of changing your address more than an average American?

Having to pack and relocate everything you own for the tenth time in your life can be really frustrating. But, you can make your move simpler and keep the problems away. Simply put in charge some of the best long-distance moving companies and leave moving preparations to them. After all, these guys are professionals and they know how to organize successful relocations. When you have a moving company by your side, you don’t have to worry about the downsides of relocations. They will make sure you have the best possible experience.

Verified Movers can turn every relocation into a breeze

As you can see, it is true that Americans move more than Europeans. So, if you ever through that you are currently the only one who is sitting in the living room filled with empty cardboard boxes, know that you are not the only one. And you know what else – you are not alone in this process! We, at Verified Movers, are here to do everything we can to turn your move into a breeze. Right at our website, you can learn about the relocation process itself just by reading our comprehensive moving guides. You can learn about different moving services, get a free moving quote, and find a moving company that suits your needs the most! And, in case you have any questions, we will gladly answer all of them.

You have learned why do Americans move so much more than Europeans. If you want to learn more about what we can offer you, make sure to get in touch with us! Let us help you relocate in the simplest possible manner.