Home / Who’s Moving Into and Out of San Francisco?

San Francisco is one of the most desirable cities in the US. Still, it seems like many people are moving into and out of San Francisco at the same time. It is understandable why people are coming, however, the question is why so many people are leaving. Verified Movers has prepared a preview of San Francisco’s main migration statistics in previous years and we will take a look at the current situation regarding the recent pandemic and how it is affecting the city.

The living costs in San Francisco are exceptionally high. That might be one of the reasons for people to move out of the city

The first thing that you need to think about whenever you are considering moving to another city is living costs. The living costs differ around the country and you do not want to end up in a place with particularly high living expenses without knowing that in advance. Unfortunately, if you consider moving to San Francisco, you will be moving to a city with one of the highest living expenses in the US. Or maybe this is exactly why you are thinking about relocating out of San Francisco.

Rents are high, food costs are high, and the only thing where you will get some kind of a break is with your utility costs. But that is only thanks to the mild climate. Winders are mild and it is never too cold. And the same goes for summers where it is rarely too hot. So the general electricity, heating cooling, and water consumption are lower than in the rest of the country. Naturally, if you are relocating to San Francisco because of a well-paid job you will not mind high living costs and you can start dialing long distance moving companies California to schedule your move. But just before you do, take a look at median living costs in San Francisco in 2020:

Are these figures starting to scare you? Do not worry too much. A monthly income of around $5,000 per month or $60,000 per year will allow you to live a normal life in San Francisco and maybe even to save something along the way for unexpected events that happen at least a couple of times per year. You know, things like home or car repairs, dental issues, or similar.  As far as high rents are concerned, $3,500 average for a one-bedroom apartment is pretty high, but there are parts of the city where you can rent a place well below that figure. The good side of San Francisco is that it has one of the lowest unemployment rates in the whole country and a median household income of $104,552.

If you are moving to San Francisco and you do not have a job waiting for you, make sure that you have the money to cover at least 6 months of expenses

Still, if you are moving without a job, you need to have money for at least 6 months to cover your expenses, which is around $30,000. Also, do not forget to estimate your moving costs before you run the entire moving operation especially if you are moving cross country.

Average relocation costs when relocating into and out of San Francisco

Cross country relocations are the most common type of move when it comes to moving into and out of the City by the Bay. Here are the average moving costs in 2020:

As you can see, long distance relocation for a 4-5 bedroom home can easily go well above $8,000. And with all those fraudulent movers that are out there waiting to rip you off if you are not careful your price could go even higher. Therefore, when you decide to move make sure that you find professional and reliable long distance moving companies to help you out. Websites like Verified Movers that have large databases of reliable companies could be a good place to start your search.

Long distance relocations are exactly what is going on when people are migrating into San Francisco. As San Francisco is one of the most popular cities in the US, many people from California are coming here, despite Los Angeles being the main center and the most famous city. Still, the surprising thing is that many people are coming to San Francisco from the east coast states like New York, Massachusetts, or even Florida. Of course, the abundance of well-paid jobs is the major cause of this trend. But we shouldn’t disregard the sheer beauty of the city itself that is pulling a lot of people to move here.

Where are those people coming from the most? 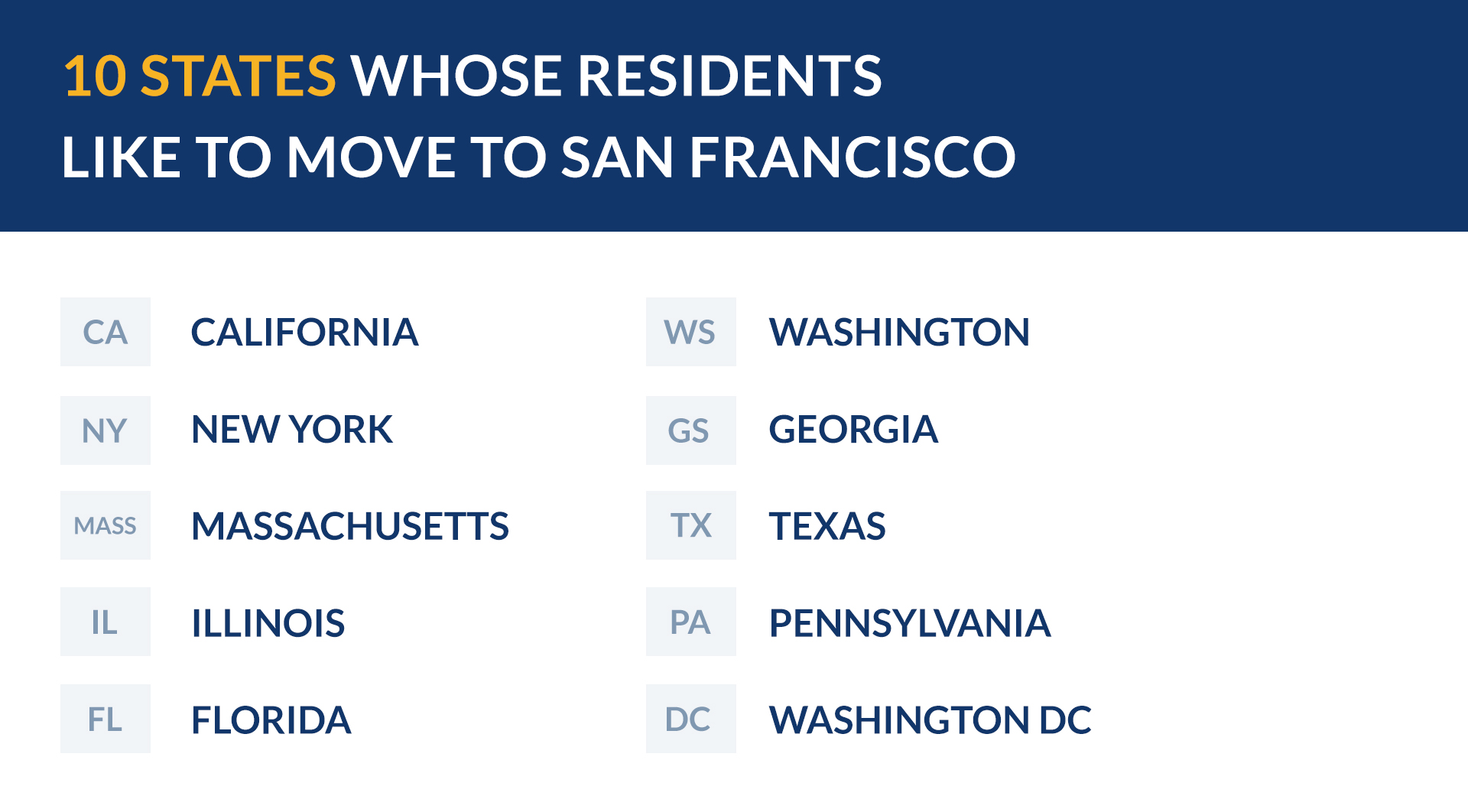 When we look at particular large cities, the situation changes a bit. 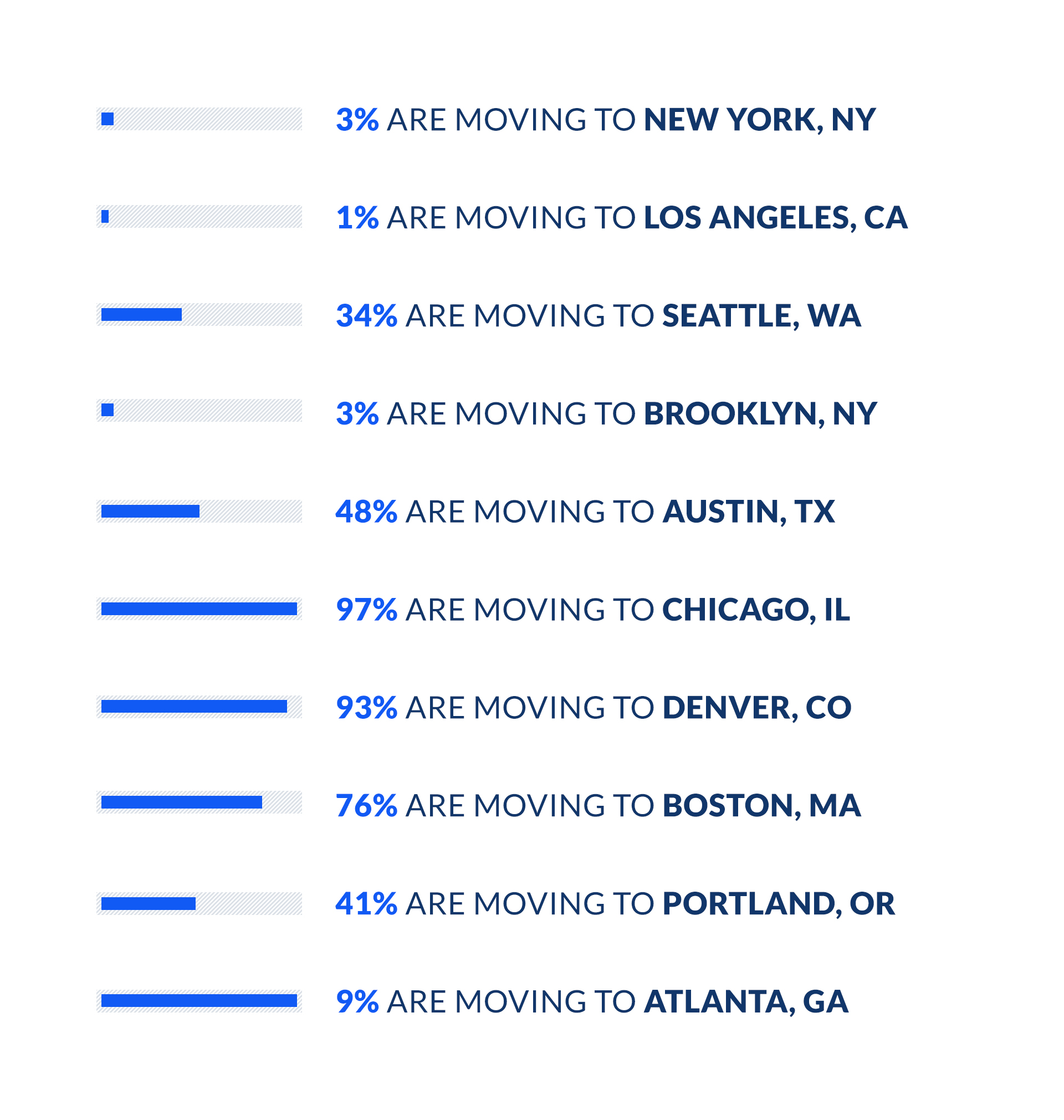 Many people are moving into and out of San Francisco. When they decide to leave, where are they moving most often?

On the other hand, when we look at where are people relocating out of San Francisco going the situation looks pretty much the same. It all goes with a theory that many people move here out of curiosity, after a while, they decide that it is not what they hoped for, and decide to move back to their parents’ home. Most, around 14% of people relocating out of San Francisco are going to New York, NY. The second is Los Angeles. But Seattle, as the third, might come as a surprise. Naturally, if you are in San Francisco right now and you are among those who are thinking about moving to Seattle, think well before you hire long distance moving companies Washington. Only with reputable movers, you can expect fair prices and decent service. Anyway, here are the most popular cities people leaving San Francisco move to: 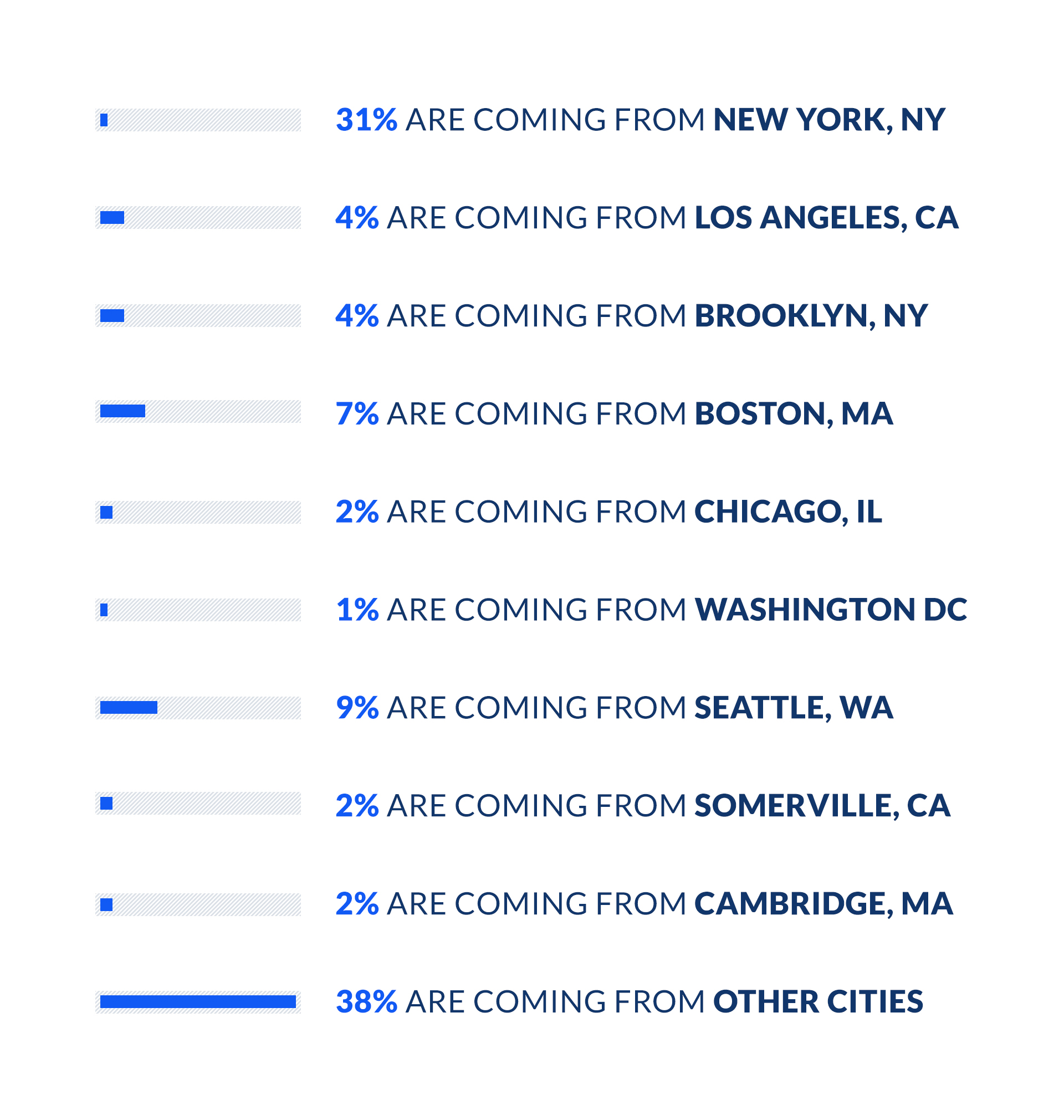 Numbers in 2020 do not look promising for San Francisco. There are many people currently moving out of the city

These are the numbers and percentages of people relocating into and out of San Francisco from 2018. and from 2019. Unfortunately, things are not looking as bright in 2020. This years’ numbers tell a completely different story. This year’s numbers tell us, and what moving companies have confirmed, that almost all relocations going on in the city right now are 100% outbound relocations. People are leaving San Francisco as well as other large metropolitan areas mainly because of the problems caused by the coronavirus pandemic.

Recent lockdowns and job uncertainty are driving people out of one of the most expensive cities in the US. However, it is not so obvious at a first glance. Empty streets might just be a result of people being scared for their health and avoiding to leave their homes as much as possible. However, that is not the case. When we look at this year’s sales tax collections in San Francisco and compare those numbers with surrounding cities it is clear that people are not here. That they have fled the city. Take a look at the drastic drop in sales tax collections in San Francisco comparing 2019 and 2020: 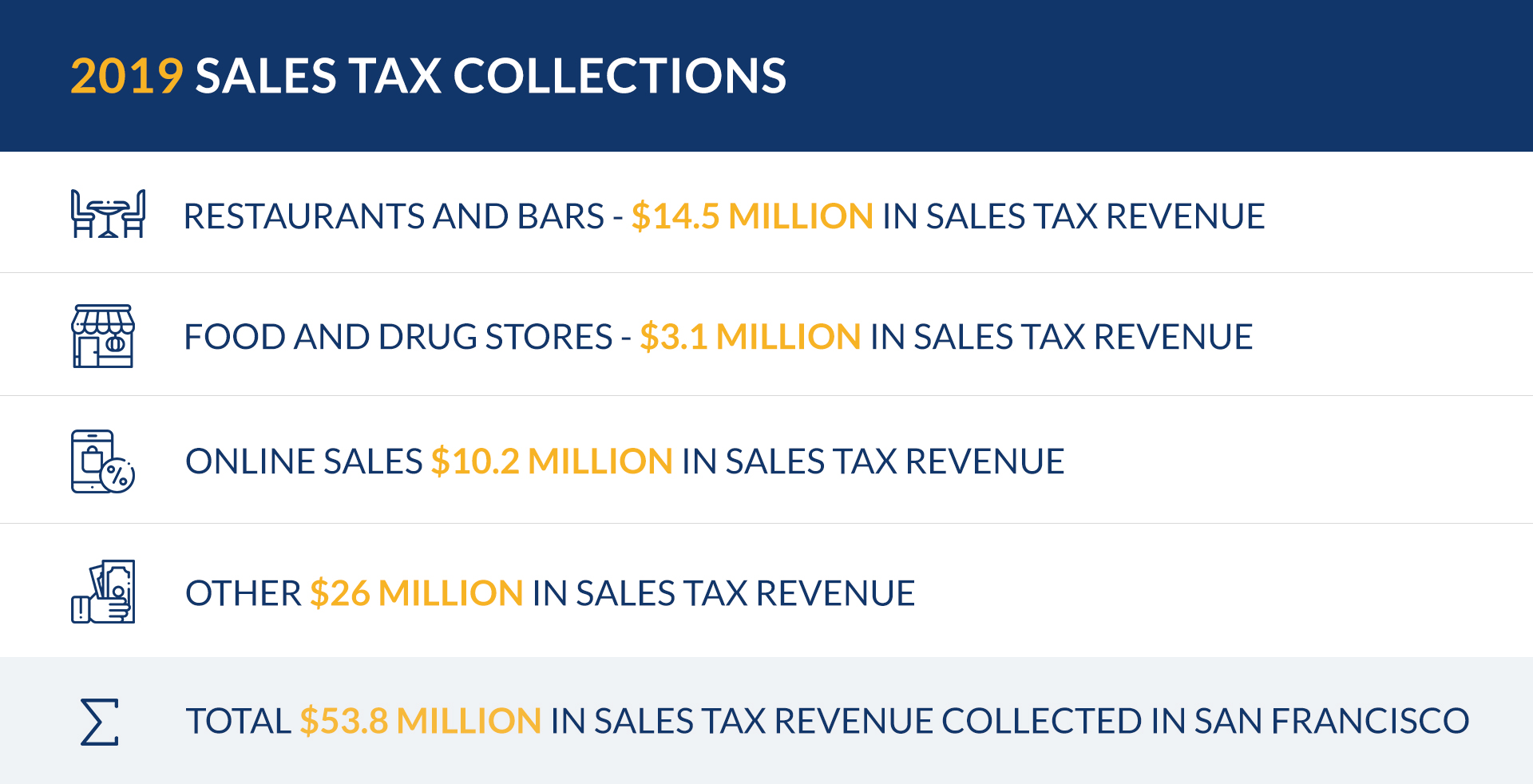 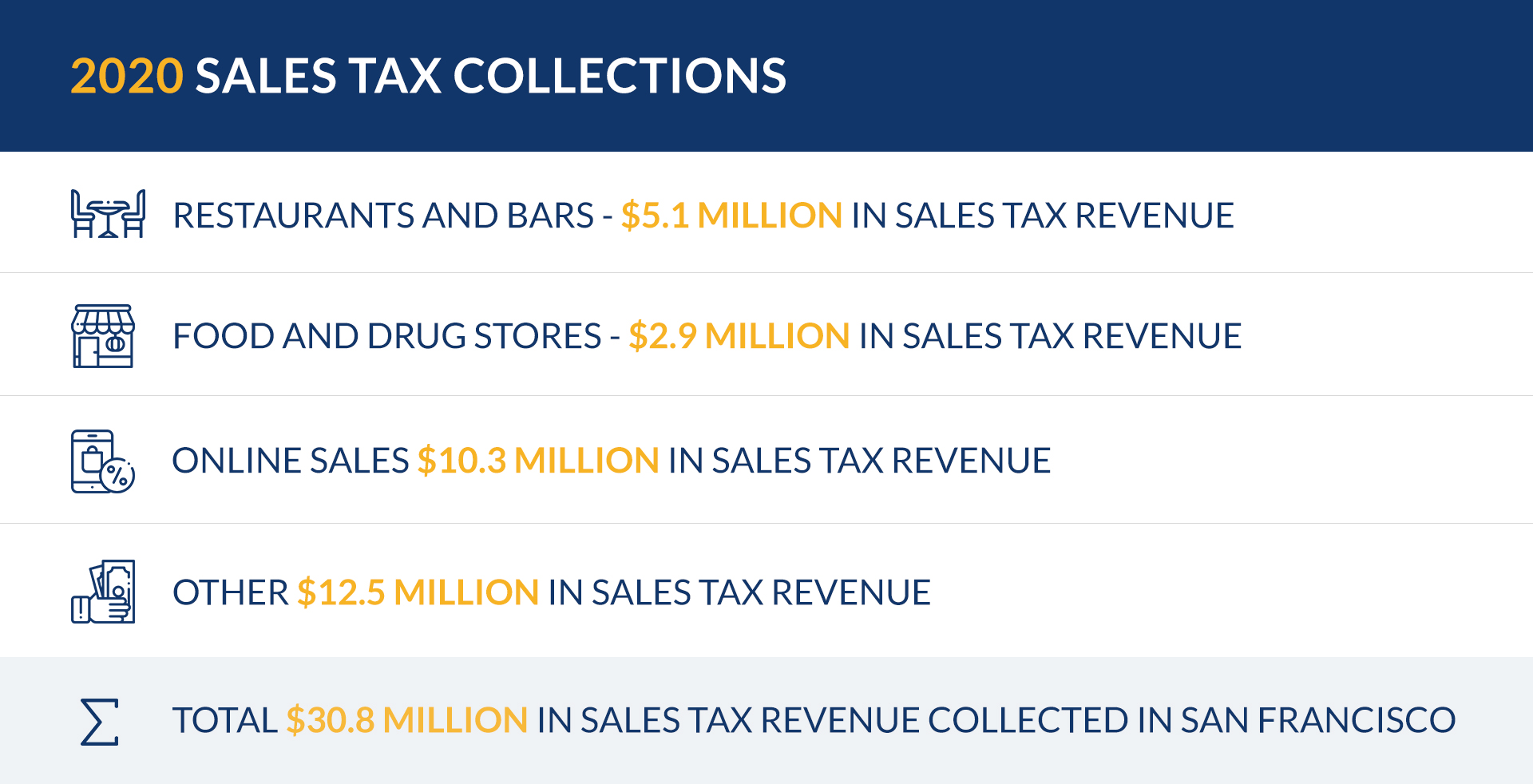 One number tells us that everybody fled the city

Here we can see a significant drop in the collected sales taxes, which is understandable considering lockdowns and the situation altogether. However, when we compare these numbers with similar-sized and surrounding cities one thing stands out. All those cities like Los Angeles, San Diego, or Sacramento had similar drops except for the online sales. Online sales taxes collected in California had an average 30% increase all except San Francisco who had a marginal 1% increase in online sales tax collected. This one little thing tells us that there are not more people moving into and out of San Francisco. Currently, there are only people who are leaving the city. Hopefully, this is just a temporary situation. And everything should go back to normal once things with the coronavirus settle down and life goes back to normal.

The situation in 2020 is not representative. Once life comes back to normal, San Francisco migration will stabilize as well

As you can see, even though there were many people moving into and out of San Francisco in recent years, the situation in 2020 has dramatically changed. Of course, this is just a temporary thing and the situation will come back to normal soon.